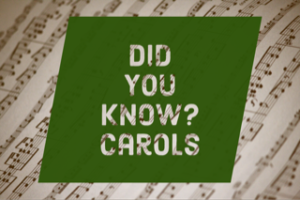 While often the same carols were repeated, the pleasure never dulled. That’s the magic of this season. The joyous, upbeat music recalls happy memories and moments. This feeling isn’t new. In fact, the delight has been around since the beginning.

#1 Carols Have a Checkered Past

Carols originally began as a songs of celebration for every season. The upbeat music was to accompany dances to enhance the celebrations of fertility and pagan festivities.

In 129 A.D. Roman Bishop Telesphous declared “Angels Hymn” to be sung every Christmas time. In 1223, the festivities really got going with Nativity plays and upbeat melodies by St Francis of Assisi.

Holiday joy and cheer combined with wassailing (driving away evil spirits and drinking to the health of the homeowner) proved to be too much happiness for the original Grinch, Puritan English Parliament.

In the mid-seventh century, Parliament forbid the entire Christmas holiday and celebrations of those jubilant carol singers would land you accused of witchcraft (and we all know where that led people: prison or death).

Yet those catchy tunes continued in secret. Decades passed. The ban finally lifted. The Eighteenth century brought an explosion of new Carols.

2. Carols Bring Us Together

Dr. Williams Cummings, an organist, combined the words of a Christian lyricist, Charles Wesley, and the music of Jewish composer, Felix Mendelssohn, to create Hark, the Herald Angels Sing. Just the right spirit for the love, joy, giving and receiving of the holiday.

This breaking down of barriers continued on a wintery night in 1914 during World War 1. An unofficial ceasefire brought soldiers from Germany, Britain and France crossing the lines to play soccer, exchange treats and mingle. This night concluded with many joining voices singing carols.

Aristotle wrote of the healing benefits of music. Plato said, “Music is a moral law. It gives soul to the universe, wings to the mind, flight to the imagination, a charm to sadness, gaiety to everything. It is the essence of order and lends to all the good, just, and beautiful.”

When we’re listening to the happy notes of our favorite Christmas tune, dopamine is released in our brains. Studies show music boosts self-esteem, lowers anxiety and depression. So during the potential craziness of the Season, hum your favorite merry carol and let the good times roll!

Whether you’re singing Jingle Bells or humming Silent Night, I hope you find yourself being blessed with cherished memories and all of the merriment and blessings this season brings!

Consider the following to make the most of this post.

What song is YOUR Goddess singing?

Rockin’ Around the Christmas Tree – Goddess of Action

Must Be Santa – Goddess of Order

All I Want For Christmas – Goddess of Optimism

Let There Be Peace On Earth – Goddess of Peace

Join the fun on the Sassi Goddess Facebook page! 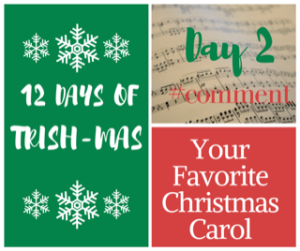 ← 10 Top Tips to Get A Great Psychic Reading